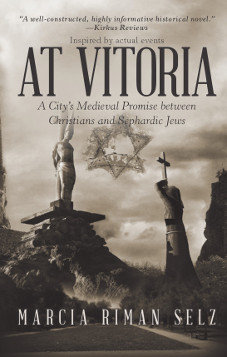 Based on actual events.

How could a medieval Jewish cemetery in Vitoria, Spain be the cause of so much debate? At Vitoria transports the reader to the Iberian Peninsula at the end of the fifteenth century and weaves a story of success, downfall, love, terror, tragedy, shame, and honor. The historical and cultural details surrounding the story make for an evocative narrative that draws the reader in and provides an engaging sense of realism.

At Vitoria introduces the reader to a Jewish family living in medieval Vitoria:

At Vitoria tells how the Crevagos cope with the realities of Inquisition Spain and with the edict of expulsion issued by KING FERDINAND and QUEEN ISABELLA. It is also the story of how the medieval Christians of Vitoria take an oath to preserve the Jewish cemetery and keep this promise for almost 500 years. In 1952, the descendants of the Jews of Vitoria must vote to either release Vitoria’s Town Council from the oath or require the Christians of Vitoria to uphold it.

At Vitoria is a heart wrenching, but ultimately heart-warming read, with a life-affirming message. It is sure to cause smiles, tears, and pride in humanity.

Marcia Riman Selz spent her business career as a marketing consultant to financial institutions. But after a vacation in Spain, the calling to write about Vitoria and its medieval Jewish community was overwhelming. So after several years of research, she wrote At Vitoria.

Dr. Selz earned her Ph.D. from the Peter F. Drucker Graduate School of Management at Claremont Graduate University, her MBA from Loyola-Marymount University and her Bachelors Degree from Indiana University.